Every day, we run across the everyday error of choosing between “every day” and “everyday.” So what’s the difference? Aren’t they the same? Not in the slightest!

Even though the only difference between the two is a space, the phrase “every day” and the adjective “everyday” mean two completely different things. They cannot be used interchangeably. So what do they mean, and how should each be used?

“Everyday” is an adjective to describe something that is common or run of the mill. It always modifies a noun, usually by preceding it. If you can swap “everyday” with “common” and have the sentence retain its original meaning, then you are on the right track.

Example: Spelling mistakes are an everyday problem in writing.

In this example, “everyday” is in front of the noun, and we see it acting as an adjective. If we swap it out with “common” and write “Spelling mistakes are a common problem in writing,” the sentence retains its meaning.

This phrase literally means that something occurs every day. It refers to a unit of time and functions as an adverb. It will often follow a noun rather than precede it or come at the beginning of the sentence.

In this example, “every day” is an adverb and modifies the verb rather than a noun. But don’t swap this phrase with “daily.” “Daily” can be used as both an adjective and an adverb and will lead to confusion. Instead, try swapping it with “often.” Although it has a different meaning, “often” is an adverb referring to time: “Spelling mistakes happen often.” The meaning changes slightly, but the sentence still makes sense.

In the two examples above, we can’t use the synonyms for “every day” and “everyday” interchangeably. “Spelling mistakes are an often problem,” and “Spelling mistakes happen common” are both nonsensical. Be smart, and know when to use each correctly.

So now you know how to avoid making this everyday mistake, every day. Blogging: Carving a Niche in a Crowded Blogosphere

As the blogosphere consistently becomes more crowded, it’s challenging for many bloggers to stand out. Discovering your niche, a key to being recognized, will instantly… 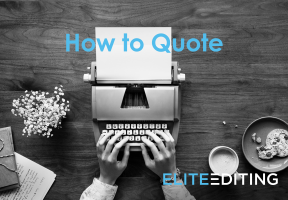 One of the hardest writing techniques to learn and remember is how to quote a quote—yes, quote is one of those words that’s both a… Luis von Ahn, the man who created CAPTCHA (the little box into which all must copy letters and numbers to prove our humanity online), has…